Teaching with Doodle Notes:
​A Video Tutorial
Brigid, creator of Math Giraffe and developer of the doodle note method (TM), teaches how to use doodle notes in your own classroom, shares strategies to help you take full advantage of doodle note templates, and offers plenty of tips for making your own simple visual note taking resources for your own students.
Hear from teachers who are using the doodle note
​strategy each day in their own classrooms
​
-- tips, tricks, and testimonials --
I first bought the geometry notes to use a few years back with a young man from El Salvador.  He moved here thinking that he could go to community college, but they put him back in high school (strange...).  But he failed Geometry and if he didn't pass it was not going to be able to get a diploma before he turned 21.  He was going to "age out" of our local district without a diploma.  So the principal asked me if I would take him on as a Home Hospital student and give him a crash course in Geometry so he could graduate.  His English wasn't great and my Spanish wasn't great.  But I found the the Doodle Notes really worked well.  We met in the library after school which was a zoo, because it was the detention "study hall".  But we started getting kids walking up to us every week and checking out what we were doing.  One friend of his said, "How's come none of my teachers ever taught like this?"  That is a serious compliment from a tough kid in a rough school!!

I used the geometry notes again last year with my 19-year-old gang member in jail.  He showed up for our first meeting all tough in his gang clothes and sauntered over and sat down in a corner of the room.  I had to ask every young man in the room if it was him before I actually located him.  Ugh!!  I just dumped out my markers and pens, pulled out the Doodle Notes and told him that was how we were going to have class.  He started out using just two colors that first day.  But...the second meeting, he showed up on time, dressed neatly, polite as could be, and started using ALL of the colors!!  It turned out that he was super smart and totally earned an A+ in my class.  It was a complete turn around between the first meeting where he had to play it cool and the second meeting where he was eager to participate.  I ended up writing him a few job references and really enjoyed working with him.

I totally credit the Doodle Notes, because it could have been a really long semester if I had just brought boring worksheets.  He did plenty of practice problems, but he got in the habit of colorizing the parts of problems on regular worksheets, too.  We could have been done a few weeks earlier, but I know he was stalling because he was enjoying getting together.

I have used the Algebra notes (and Calculus) with a LOT of my kids that are on Home Hospital because they have attempted suicide.  My youngest was in THIRD GRADE.  I actually still work with him as a private tutor now, and he is in 7th grade.  He was adopted from social services as a baby by an older lady, and they told her nothing about his health history.  He was actually born addicted to drugs and alcohol and has most of the characteristic issues of a fetal drug and alcohol baby.

He's dyslexic, dysgraphic, ADHD...a whole list of labels.  But he is funny, smart, loves art, and I keep telling Mom what my headmaster used to say: the cure for ADHD is graduation.  I used a lot of the elementary Doodle Notes with him last year and made some in the Doodle Note Club when I didn't find what I needed.  He has serious retention problems and it was actually math that was making him suicidal.  He felt so bad about the fact that he couldn't add and subtract (let alone multiply or divide) in the third grade that he just lost it when anyone mentioned math and threatened to kill himself.  The nice thing about Doodle Notes is they don't say Kindergarten in the corner when you are working with a 4th grader who can't add!

For my kids that are in the hospital, Doodle Notes are a bright spot in their schoolwork.  I have had one girl for 5 years who has deteriorated physically over the years until she is in a wheelchair with limited hand mobility.  But as she says, there is nothing wrong with her brain; it is her body that doesn't work.  I used Doodle Notes with the blessing of her Occupational Therapist to better explain Algebra and to give her hand exercise at the same time.  She aged out of the district before she could graduate, so I'm using the notes now to help her study for her GED.  Unfortunately, she is at Ronald McDonald House in Baltimore, so I don't get to see her very often.  I don't even remember how I found out about you in the first place, but Doodle Notes have been a lifesaver for so many of my kids.  As I make more of the higher level math pages, I'll share them in the club.

- Sara, "Home Hospital" Teacher
Want to dive deeper and hear from even more teachers?
We've got an entire group on Facebook where we chat and compare notes,
and you're invited! >> Doodle Notes Teacher Network
One of my favorite ways to let students do doodle notes is with the stickers.  (And it's by far the easiest!)  They can create their own visual note from scratch on any sheet of notebook paper.  These are so versatile! 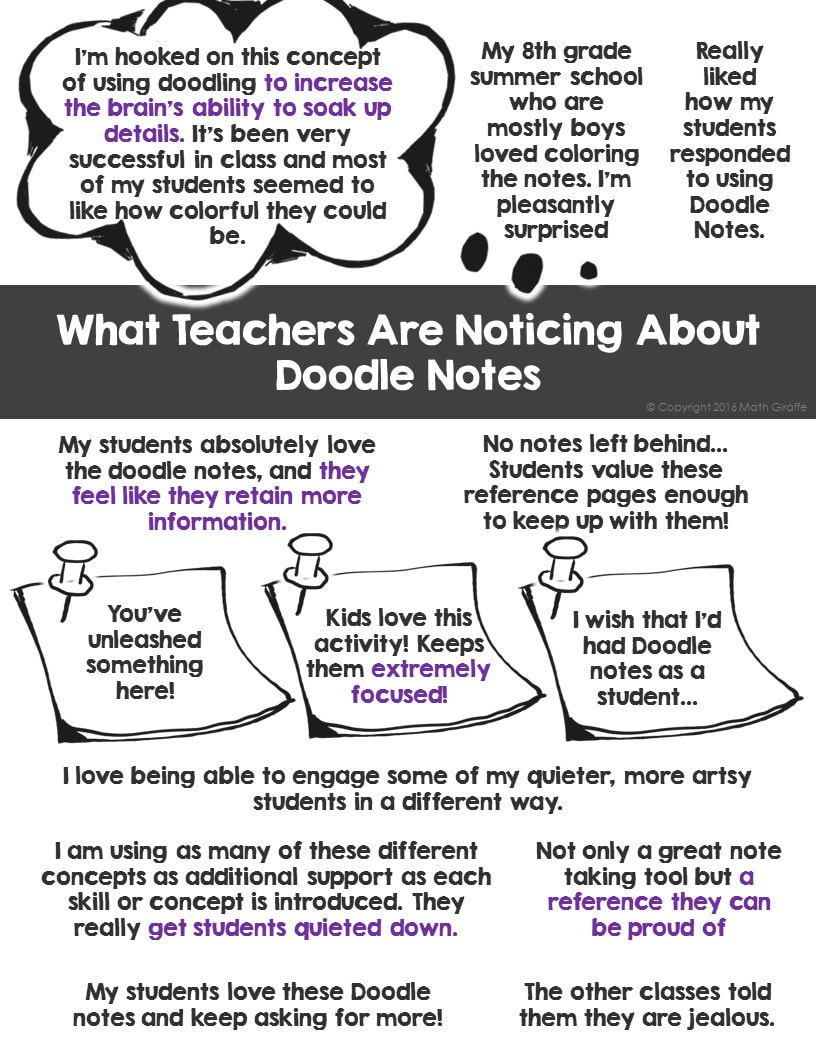 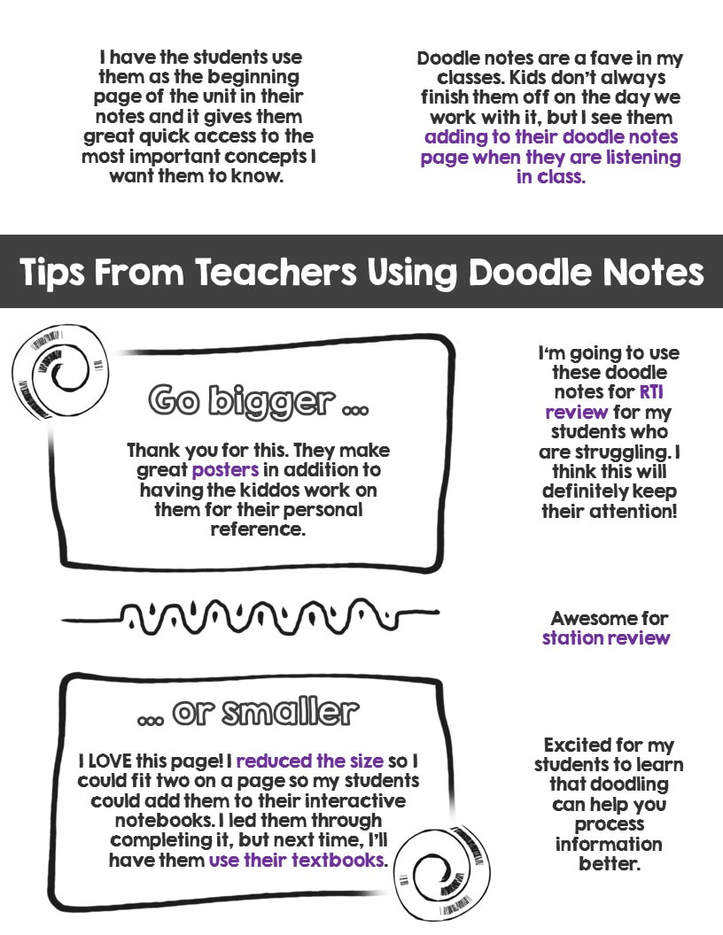 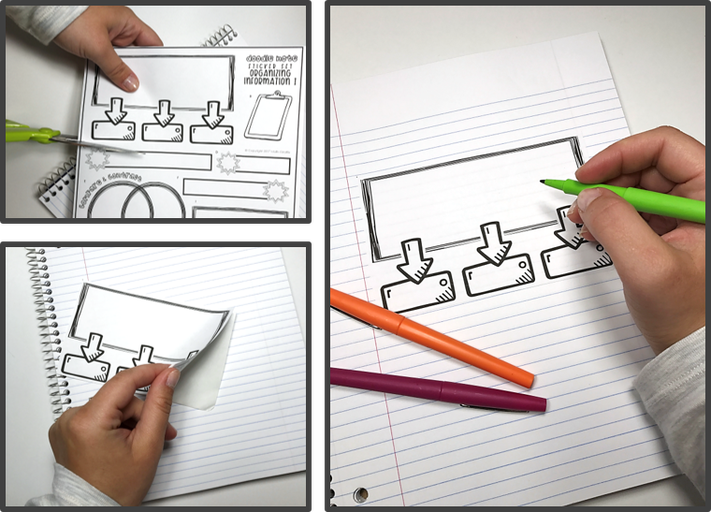 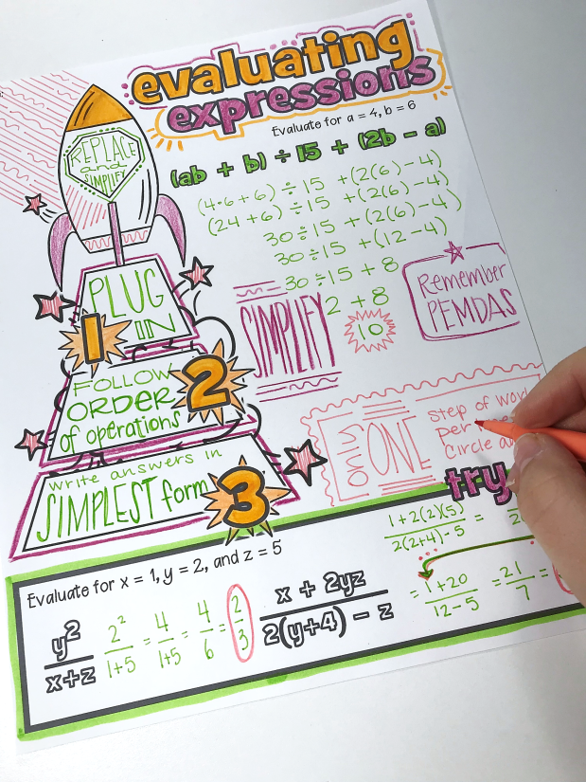